A reason for why visual snow seems to be more common in Finland and Australia than in Switzerland or Austria?

Common food proteins when they are digested can breakdown to release opioid peptides. These have structural similarities to morphine and they are able to act on the same receptors. Some of these can cause health problems both through opioid and non-opioid mechanisms. These are not necessarily as direct, or so simply linked as morphine, but in certain circumstances the effects may be similarly potent.

Casein, is the main type of protein found in milk and other dairy products. Beta casein, is one of the main casein proteins and has two variants: a1 beta-casein and a2 beta-casein. Beta casein is made up of 209 amino acids and the a1 variant is the result of a genetic mutation in cows that means it differs in its structure from a2: it has one amino acid which is different. Because of this difference it contains an additionally releasable bio-active opioid peptide: beta-casomorphin 7 (BCM7).

We have only been aware of BCM7 existence since 1979 but early epidemiological (demographic) and anecdotal associations of a1 beta-casein with illness have since been increasingly substantiated by evidence. Type-1 diabetes was initially linked with milk consumption in animals, then in humans – this finding was supported by some but not other studies. Then however it was observed that if adjusted for just a1 beta-casein consumption the correlation dramatically increases (from r= 0.402, to r= 0.726) and more studies afterwards affirmed this epidemiological link.

BCM7 has since been implicated in the disease etiology (cause) through opioid and non-opioid mechanisms. Similarly ischaemic heart disease (IHD) – there is a strong correlation ( r=0.76) between IHD incidence and country consumption of a1 beta-casein. BCM7 has been found to oxidise low density lipoproteins, which implicates it in the disease etiology. In our case, Google Trends for “visual snow” (2004-2018) shows significant interest from 13 countries and presents a striking early epidemiological association of a1 beta-casein consumption with visual snow. 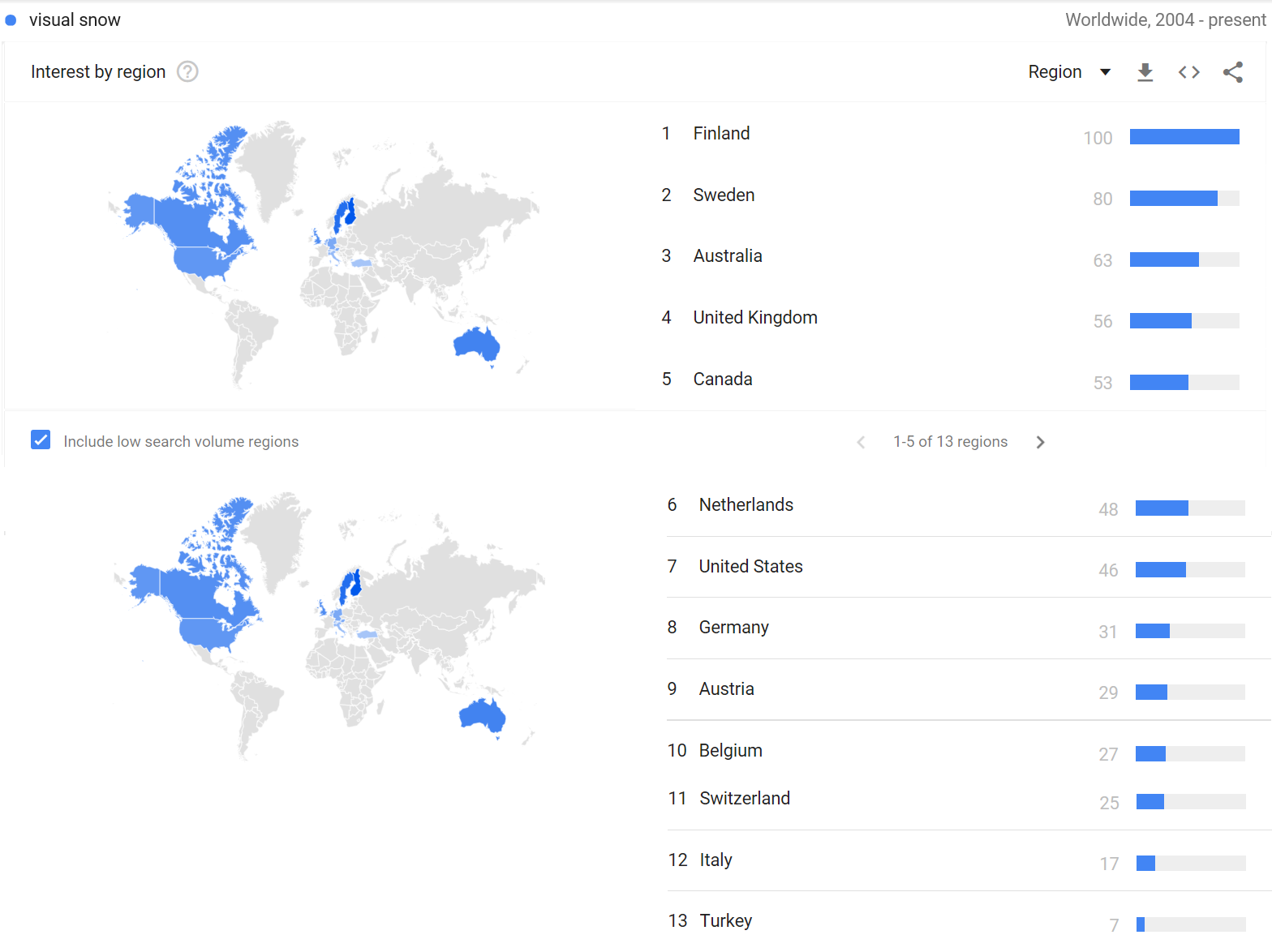 There is a weak positive correlation between country search interest for visual snow (2004-2018) and their consumption of milk (2013, latest data).

When individual country profiles are considered it can however be predicted that the deviations between relative milk consumption and visual snow interest may correspond to relative a1 beta-casein consumption and that actually a truer correlation may be found with a1 beta-casein consumption. In many countries dairy cows have been extensively cross-bred and they originate from the same common breeds with the A1 mutation e.g. Holstein, Friesian, Ayrshire. These cows are now more common – with particularly high numbers of such cows in Northern Europe, parts of Scandinavia, Australia, Canada, UK, and the US. The same places with the highest interest in visual snow ( but not necessarily with the highest consumption of milk).

The countries with less interest in visual snow appear also to be the ones with relatively less A1 consumption who still have some significant populations of domestic cattle with more A2 (e.g. Simmental in Switzerland and Austria). Lower A1 per capita consuming countries are noticeably absent from Google trends for visual snow altogether – A1 is rare or absent in Southern Europe, Asia, and Africa.

Higher interests in visual snow despite lower consumptions of milk are therefore predicted to be indicative of higher relative a1 beta-Casein milk consumption: UK, Australia, Canada. Lower interests in visual snow despite higher milk consumptions are predicted to be indicative of lower relative a1 b-casein milk consumption: Switzerland, Italy, Austria. A 2003 study on ischaemic heart disease, type-1 diabetes and A1 beta- casein supports this prediction, with data for A1 per capita consumption from 1990-1994 showing that Austria, Switzerland, Italy have A1 consumption at approximately half of that of Finland, Sweden, UK and Australia.