Here is the video and a short summary of Professor Viktoria Pelak’s presentation at the 2018 Visual Snow Conference event. Pelak discusses how certain symptoms of Visual Snow Syndrome can already roughly be mapped onto the visual pathways of the brain.

In total there are five presentations from the Visual Snow Conference that I have chosen to write about. I recommend that you read about them/watch the videos in this order. The first two are more general, the last three go into more complex detail. If you have already seen some of the videos I recommend that you watch them again anyway, as it is easy to miss certain details.

The Visual System And Visual Snow

Pelak explains that 80% of sensory experience comes through the eye, in the form of light and light wavelengths. She says this is then picked up by retina and enters the cornea. The retina processes wavelengths in the form of electrical chemical transmission, and this information goes via the optic nerve to the thalamus. There some of it stops, and the thalamus sends off visual information to the visual cortex, which then reports back to the thalamus. 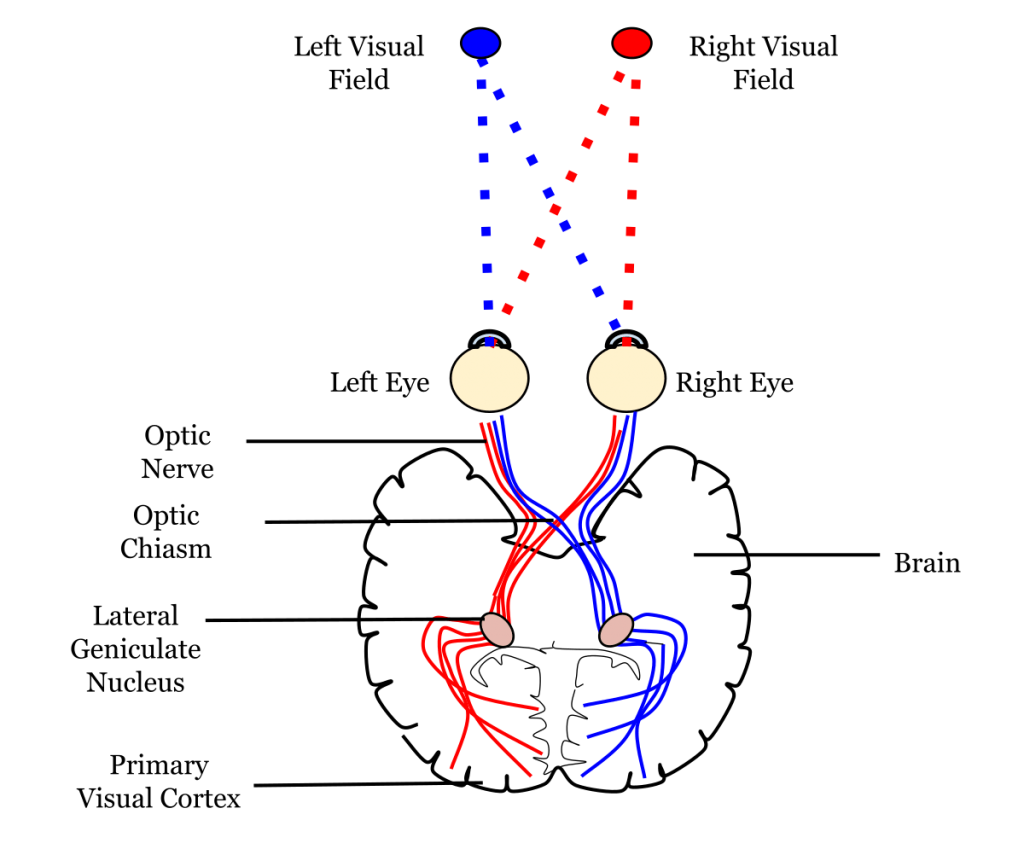 Pelak displays a bird’s eye view of the optic chiasm (similar to the one above), it shows that half of the world we see is actually sent to one side of the brain and vice versa. Visual Snow is seen throughout whole visual field, so it can’t be on one side and it can’t be at these early stages involving the eyes, optic nerve, lateral geniculate nucleus, or the primary visual cortex as James T. Fulton discusses.

The primary visual cortex not really primary, it is simply the first area of the cortex that is processing images. There are many other areas involved in vision. Certain higher order areas  monitor the entire visual field. The thalamus takes various pathways to send and receive information and also sends non-visual information. Of particular interest for Visual Snow Syndrome are connections between the thalamus ( potentially the pulvinar, which helps in understanding what to pay attention to) and visual cortical regions outside of the primary visual cortex ( specifically V4 in the lingual gyrus) that modulate visual stimuli.

Entoptic phenomenon such as floaters and flashes of light, in contrast to Visual Snow have to do with seeing things within eye. Floaters Pelak says can be pieces of vitreous detached from retina, or blood cells that are constantly moving throughout blood vessels. Flashes of light are due to mechanical stimulation within the eye. This is all normal physiology but the question is why those with Visual Snow are constantly attending to it or noticing it.

Normally, she says retinal nerve cells impulses are constantly firing. Sometimes signals make it to consciousness, sometimes they don’t. If it is an insignificant stimuli or random “noise” such as floaters it requires networks in the brain to not pay attention to that signal as Joanne Fielding discussed. These networks in the brain modulate the thalamus and extra primary visual cortical areas (higher order regions) but in Visual Snow Syndrome, Pelak says this modulation seems to go wrong. 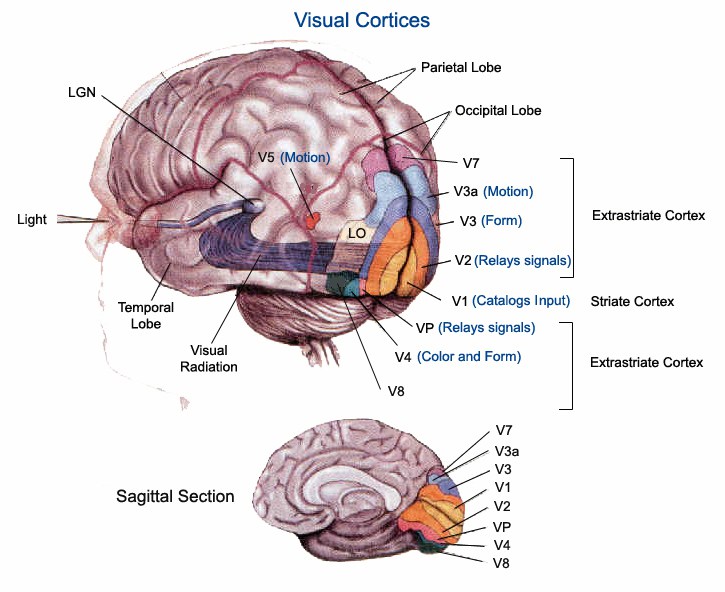 Pelak says that knowledge about Palinopsia (afterimages/trails) comes from patients who have lesions or injuries, following strokes and brain tumours. Palinopsia can also occur due to drugs, but there it is more difficult to locate the responsible area. Lesions and injuries causing palinopisa are generally found in the parietal and posterior parietal and temporal regions (visible on above diagram). Again, these regions are important for vision but outside of the primary visual cortex.

These are once again higher order visual regions that are associated with palinopsia. Palinopsia is believed to be a hyperexcitable state where there is a persistence in signals being fired from neurons. It could be as Pelak says that these signals are being constantly being produced at a weaker level, or even coming from different areas of the brain once it has been sent on from visual areas.

There is of course some evidence for so called cortical hyperexcitablity in Visual Snow Syndrome. As Peter Goadsby found there is excessive metabolic activity in the lingual gyrus, within the temporal lobes of some with Visual Snow. This area is important for processing visual information and so it is no coincidence that there are hypermetabolic changes being observed there according to Pelak. She explains that it is more difficult to study such changes in the thalmus for technical reasons.

This is a good overview of what is probably going on in the visual system of those with Visual Snow. It also ties together the other presentations quite well.

It is equally important as Visual Snow that floaters and associated symptoms are understood by those who experience them.

It would perhaps also have been interesting to have discussed some other symptoms such as photophobia, nyctalopia, and pattern glare, as well as why and how certain practical measures such as wearing tinted lenses may help.